I've added a page of educational wall charts on racial issues. These were widely used in schools during the Nazi era. My copy does not have the anti-Semitic charts that came with the package. The Nazis promoted having as many children as possible, arguing that Germany faced extinction if the birthrate did not increase, and that it would be better off without various "inferior" types of people. 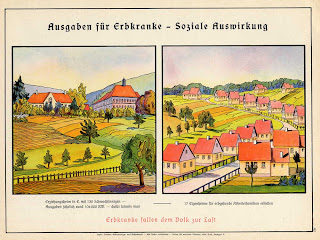 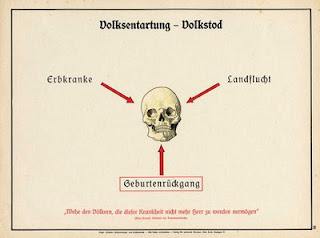 The Illustrierter Beobachter, the Nazi Party's illustrated weekly, gave extensive coverage to Nazi activities. This article, from September 1931, reports on a Hitler visit to Gera. 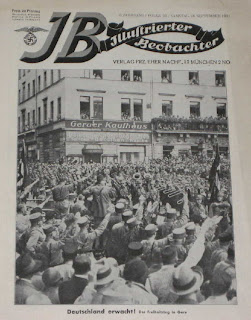 Since most pictures of the Third Reich are in black and white, it is easy to forget how colorful a phenomenon it was. I've added a page from a "bestseller" of the early years of Nazi Germany with a collection of photographs in color. I think the pictures were actually taken in black and white, since some of them pre-date the introduction of color film, but I don't know much about the process. Should any reader know more, I'd appreciate being informed.

Two examples. The first shows Hitler with the "Blood flag," carried during the Beer Hall Putsch of 1933. It was probably the most "sacred" Nazi relic. The second shows Horst Wessel, the author of the party's hymn, at the head of an S.A. column at the 1929 Nuremberg Rally. 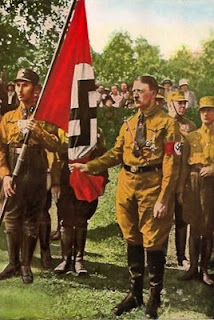 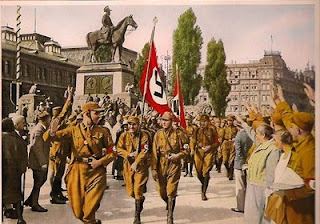 Posted by Randall Bytwerk at 7:06 PM No comments: