Of late, I've been interested in Nazi propaganda material from 1932. Today, I am adding a May 1932 pamphlet titled the Economic Emergency Program of the NSDAP. Largely based on Gregor Strasser's work, it outlines in broad terms what Nazism proposed to do to rescue Germany from the Great Depression. Although it doesn't provide much detail on how the proposals will be implemented, many of the proposals would have sounded good to Germans at the time. It proposes a huge program of job creation, land reclamation, help for farmers, import reductions, taxing the rich, helping the middle class, nationalizing the banking system, reducing interest rates, and building large numbers of private homes, among other things. 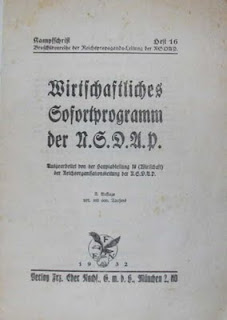 Posted by Randall Bytwerk at 9:24 AM No comments:

The latest addition to the German Propaganda Archive is a variety of charts from Die wirtschaftspolitische Parole, the official Nazi bimonthly on economic matters. It covered a wide range of topics.

Two images are below. The first is part of the Nazi anti-smoking campaign, claiming that the equivalent of two million Volkswagens have gone up in smoke, or that for the amount spent on tobacco, enough gas could have been purchased to drive 50 billion kilometers. The second image asserts that Jews are being driven out of the German economy, to the benefit of everyone else. 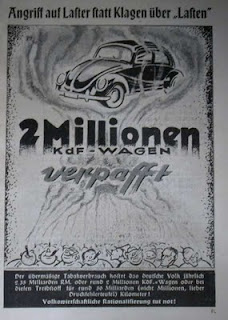 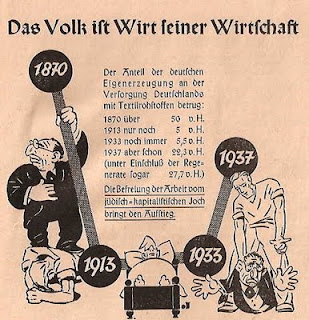 Posted by Randall Bytwerk at 9:56 PM No comments: