Soldiers appreciate pictures of women, and Nazi propaganda supplied soldiers with what they wanted. I've added a page with seven postcards from 1943 on the theme Women working for you. They showed attractive women at work in what formerly had been mostly male occupations. 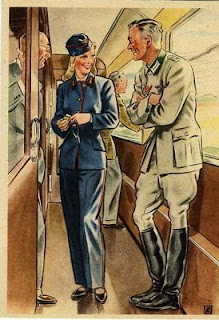 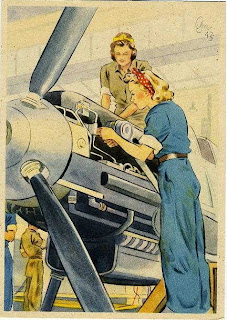 Posted by Randall Bytwerk at 6:32 PM No comments:

I came across an early Nazi poster from Westphalia, dated 1924. Hitler was in jail, and the party was illegal, so a group called the National Socialist Freedom Movement carried on some of the party's business. It is on the page of pre-1933 Nazi posters. 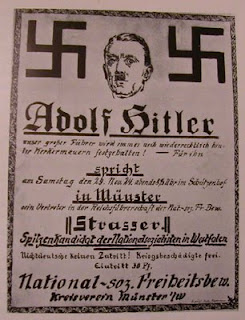 Posted by Randall Bytwerk at 10:39 AM No comments:

The Nazis reached their electoral high point in the July 1932 Reichstag elections. Although they had the largest faction, the Reichstag was unable to do anything, and new elections were called for November 1932. The Nazis lost ground, although they remained the largest party. To many, both within and outside the party, it looked as if the Nazis were declining. An opportunity to prove the contrary came with the parliamentary election in Lippe, a tiny German state with about 100,000 inhabitants. The Nazis put everything they had into the campaign, which turned out well from their point of view, and restored a sense of momentum. I've added a chapter from a book on Gau Westfalen-Nord, published in 1939, which looks back on the Lippe campaign as a great victory.
Posted by Randall Bytwerk at 4:54 PM No comments:

I've added sections from a 1937 Nazi book titled Erblehre und Rassenkunde für die Grund- und Hauptschule. It provided information for teachers on how to present Nazi racial theory to 4th through 8th graders. This was published before the German-Japanese alliance, so the Japanese are still seen as a threat to the European races.
Posted by Randall Bytwerk at 4:18 PM 1 comment:

An Episode of "Tran und Helle"

Tran und Helle was a series of 2-3 minute skits, shown as part of the newsreel before the feature during World War II in Germany. Tran, played by Ludwig Schmitz, was the conniver, always trying to hoard goods, shop on the black market, etc. Helle, played by Jupp Hussels, was the voice of good behavior. I've added a summary of a skit titled "Prisoner of War." The illustration is the cover of the pamphlet from which I take the skit. 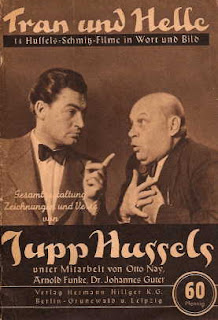 Posted by Randall Bytwerk at 9:57 AM No comments:

The last Mother's Day of the Nazi period was celebrated, if that is the right word, in 1944. Millions of women had lost husbands and sons on the battlefield, or children to Allied bombs. I've added a 1944 Mother's Day card, prepared by the party's Main Culture Office, which attempted to give some consolation to grieving women, assuring them that their loved ones were still somehow alive, that their sacrifice had been worthwhile. 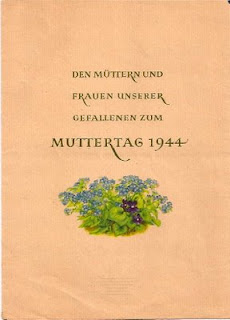 Posted by Randall Bytwerk at 3:03 PM No comments:

In February and March of 1943, there was not a lot of good news for the Nazis. Stalingrad had fallen in early February. The one bright spot was submarine warfare, where German U-boats were still sinking Allied ships in large numbers. I've translated instructions to Nazi speakers on what to say in their speeches about U-boat warfare. This was significant material, since it formed the basis for thousands of speeches delivered by Nazi orators throughout Germany.
Posted by Randall Bytwerk at 10:11 AM No comments: