If you live near New York City and are curious about what I look like, I’m giving a lecture on the evening of Friday, October 14. 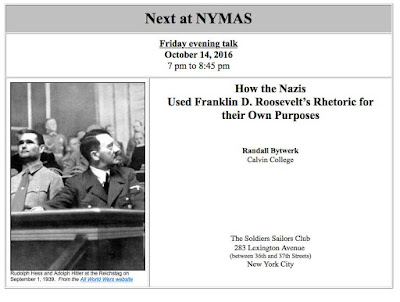 I’ll be looking at the trans-Atlantic rhetorical duel betweeen Franklin Roosevelt and Adolf Hitler between 1937 and 1939.


Posted by Randall Bytwerk at 5:06 PM No comments:

The Thieves at Ostara Publications Lose

I have temporarily, at least, been the victor in my battle against Ostara Publications, which shamelessly stole my material.

Both amazon and lulu.com have removed their plagiarized publications.

I shall see if they behave after this.
Posted by Randall Bytwerk at 2:29 PM 2 comments:

Progress against the Crooks at Ostara Publications

My last post mentioned that I had filed a complaint with amazon against Ostara Publications, which has shamelessly stolen my work.  Amazon is good at dealing with plagiarism and has removed the publication that steals from my translation of Wolfgang Diewerge’s nefarious Nazi pamphlet The War Goal of World Plutocracy, as well as two other Ostara publications.

That leaves only lulu.com, where for some reason Ostara published a second version of the stolen material. I’ve filed the appropriate complaint and expect lulu will remove it soon.

For the benefit of those curious, here are the e-mails from Ostara that makes the astonishing claim that their alleged ”translators in Germany” somehow came up with translations identical to mine:

Thank you for the quick response,

We must however confirm that all our Third Reich-era translated works -- which, we point out, are far more extensive than the two items you mention -- have been acquired and prepared by ourselves, and that nothing has been taken from your website.

For example, we note, upon looking at your website, that our translation of the series of "Unser Hitler" speeches contains all the texts, whereas your website's collection is incomplete.

You will therefore appreciate that we cannot remove our legitimate work from sale.


It is remarkable that your “paid-for” translator in Germany translated things in exactly the same way I did.  For example, compare “The Art of Propaganda” which is the first item in your Europe in the Year 2000” with this page that has been on my web site for years:
http://research.calvin.edu/german-propaganda-archive/goeb54.htm
They are identical.  The chance of two people translating the same passage in an identical way is vanishingly small.
Compare what you wish. You have reprinted large amounts of my material.  If you do have a translator in Germany, he or she cheated you by providing you with my material.
Please remove it from sale.

Thank you for your email.We are unaware of which website to which you refer, but whatever it may be, please be assured that we have taken nothing from it and used our own paid-for translators in Germany.Kind regardsRichard WilliamsSenior Editor


Rather amusing, no?
Posted by Randall Bytwerk at 10:56 PM No comments: