A "German Christian" Pamphlet from 1934

The "German Christian" movement (the Deutschen Christen) was the Nazi attempt to reconcile Christianity with Nazism, a rather difficult task. Today I add a pamphlet by Gerhard Hahn, a leader of the movement, titled The Cross of Christ and the Swastika, which discusses the activities of the movement in Hanover. Things didn't turn out quite as well as Hahn predicts in the pamphlet. 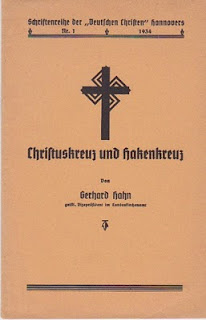 A symbol of the movement is shown on the cover above — the Christian cross superimposed on the swastika. During World War II, an American poster used the same symbol in an entirely different context. The goal was to show the cross as the victor over the swastika. I do not know anything about the history of the poster. I'd be interested to know if it was modeled after the "German Christian" logo. 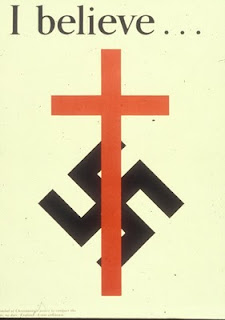 Posted by Randall Bytwerk at 4:29 PM No comments: