Goebbels on Depravity in Berlin

Today I’m adding an article from January 1928 in which Goebbels claims that the center of Berlin is a den of iniquity that the Nazis will clean up once in power. 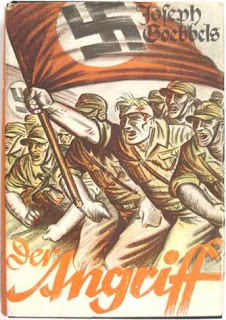 The image is the dust jacket  to a later collection of essays in which the article is reprinted.
Posted by Randall Bytwerk at 11:53 AM No comments:

CSPAN was quick to put my talk on the rhetorical duel between Hitler and FDR on their site.  It is available here: 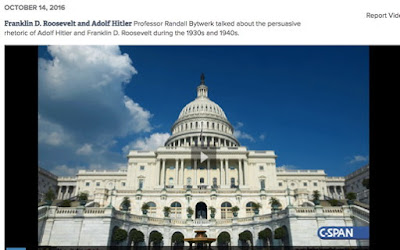 Posted by Randall Bytwerk at 9:56 PM No comments:

My Talk on FDR and Hitler on CSPAN3 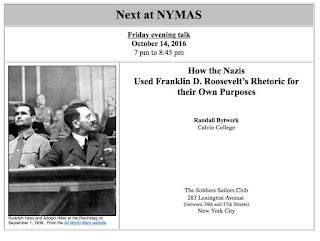 on the following schedule:


It will probably eventually be available soon the CSPAN website as well.

Posted by Randall Bytwerk at 9:46 PM No comments:

The Nazis developed a large array of rituals and ceremonies.  There is a fair amount of material on them on the GPA.

Today I’m adding a model speech used by party leaders all over Germany to give to wounded soldiers for Christmas 1944.  The war situation was grim by then, but party leaders are told to assure soldiers that victory will be theirs. 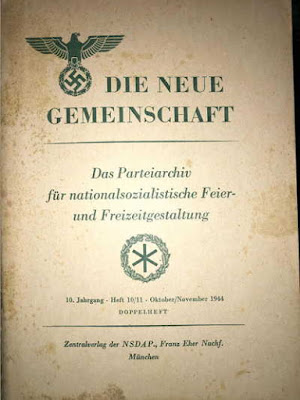 The speech comes from Die neue Gemeinschaft, a periodical that provided party leaders with material to use on ceremonial occasions.  There were a lot of those.  Besides traditional holidays like Easter and Christmas, there were the party holidays (e.g., Hitler’s birthday, the anniversary of the 1923 Beer Hall Putsch), as well as Nazi rituals of birth, coming of age, marriage, and death.
Posted by Randall Bytwerk at 9:00 PM No comments:

The Nazi put enormous effort into rituals and ceremonies.  The annual Nuremberg Rallies are only the most prominent examples.  The party provided a lot of material to party propagandists for organizing such events.  Considerable material on this is available on the GPA.

Today I am adding five photographs showing “good” and “bad” examples of the stage decorations for such events. This one, for example, shows a “well-decorated” meeting hall for Advent ceremonies.  Note that there is no suggestion of a Christian element.
Posted by Randall Bytwerk at 11:18 AM No comments:

In 1943 as German air defense capacities declined, Goebbels began suggesting that German civilians kill captured Allied airmen.  He didn’t directly ask them to do so, but suggested that it was understandable if they took such actions.

Today’s addition to the German Propaganda Article is an article titled “A Word about Enemy Air Terror,” dated 27 May 1944.  Unlike most articles on the site, it was published in the Völkischer Beobachter, the Nazi Party’s daily newspaper, rather than in Das Reich.  It was also sent to the party’s speaker corps.  It surely encouraged them to make similar suggestions to the audiences they addressed. In the end, about 350 Allied airmen were killed by German civilians.
Posted by Randall Bytwerk at 10:25 PM No comments: