Power & Style: A World History of Politics and Dress

I just got an advance copy of Power & Style: A World History of Politics and Dress (Paris: Flammarion, 2012).  Published simultaneously in English and French, it is scheduled to be released on 5 March 2013. 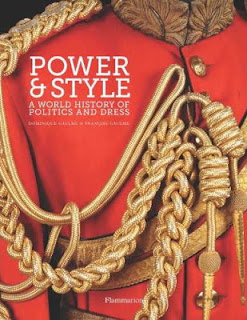 I provided an image of a painting of Hitler in uniform.  The book is filled with vivid and fascinating illustrations from throughout history.
Posted by Randall Bytwerk at 11:42 AM No comments:

ABC has a forthcoming series titled Zero Hour, with an elaborate conspiracy theory plot.  There is a Nazi theme.  I’ve been providing numerous images for the show, and recently lent about a dozen pamphlets and books from my collection to use as props.  I’ll be curious to watch the show, which is scheduled to premiere on 13 February 2013.

UPDATE: Alas, the program was cancelled after three episodes.  The remaining filmed episodes may show up this summer.
Posted by Randall Bytwerk at 11:27 AM No comments:

Germany and You: A Nazi Magazine in English

Germany and You was a magazine published between 1931 and 1943.  I know less about the magazine than I wish.  I am not sure if it was Nazi-oriented when it began, but it certainly was after 1933.  Today I add scans of the full issue for January 1942.  Although dated after Pearl Harbor, the issue was clearly prepared before the Japanese attack.

If you have more information about this interesting periodical I would be delighted to hear from you. 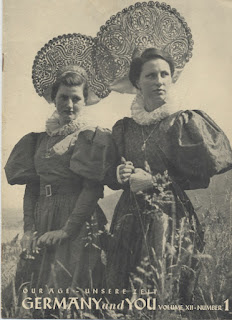 I’ve been adding caricatures to the Der Stürmer page. Some provide a clear prediction of where Nazism was headed.  Take this cartoon from 1935, for example. 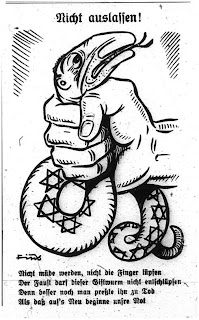 It is titled “Don’t Let Go!” The doggerel verse beneath says that it is better to strangle the Jewish serpent to death rather than allow Germany’s misery to return.

A similar theme shows up in September 1944. 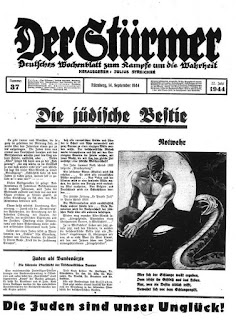 Titled “The Jewish Beast,” it suggests that Germany is defending itself against the Jewish threat.  By September 1944, most of the mass murders of the Holocaust had already occurred.

Posted by Randall Bytwerk at 9:19 AM No comments: