There are something over 500 examples of the Wochenspruch der NSDAP on the German Propaganda Archive.  It was a weekly poster with inspiring quotations that was displayed in prominent public places throughout Germany.

They were first issued in 1937 (I think), some coming from the individual Gaue, others from the Reichspropagandaleitung in Munich.  This situation continued until early in 1939, when all issues came from Munich — with the exception of Gau Sachsen, which continued to issue its own well into 1941.  I just bought the latest one I’ve seen, dated 6-12 April 1941. 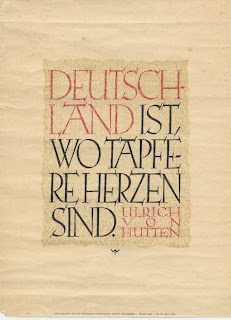 I am curious as to why Gau Sachsen kept producing its own two years longer than anyone else.  Should anyone uncover the reason I’d be delighted to hear it.
Posted by Randall Bytwerk at 2:50 PM No comments:

I’ve been gradually adding to a page of speeches and essays by the Nazi Gauleiter, the regional party bosses.  This material is rather difficult to find, and as always I welcome relevant material that I can add to the site.

Today I add part of a speech by Gauleiter Adolf Wagner, the party’s boss in Munich.  It takes on the Catholic Church for being unwilling to accept Nazism’s claims to total power.
Posted by Randall Bytwerk at 2:36 PM No comments:

I’ve been browsing through my collection of material from Unser Wille und Weg, the Nazi Party’s monthly for propagandists, looking at what happened immediately after Hitler’s takeover in 1933.  Suddenly, the propaganda system had to make dramatic adjustments to new conditions.

The article I add today contains advice for new party members.  They are advised to be modest and respectful of older party members who might be less educated and polished, but who had heeded Hitler’s call before the rest of Germany.
Posted by Randall Bytwerk at 10:35 AM No comments:

The article I add today was obsolete when published.  It proposes a new method of propaganda, assigning speakers to go house-to-house during the periods between elections.

This was a strategy that had been used during the campaign in Lippe in January 1933, with some success.  The author, Leopold Gutterer, later a high official in the Propaganda Ministry, proposes that the method be applied throughout the country.

However, by the time the article appeared Hitler was Chancellor and the proposal was outdated.
Posted by Randall Bytwerk at 3:09 PM No comments:

Anyone familiar with Nazism has heard about the annual Nuremberg Party Rallies.  However, the regional units of the Nazi party (Gaue) often held their own annual gatherings.  They were not as large or impressive as those in Nuremberg, but were still major events.

I’m adding a 1935 article from Unser Wille und Weg, the monthly for Nazi propagandists, that discusses what such Gau rallies should accomplish.  The GPA also has material from a booklet commemorating the 1936 Gautag in Niedersachsen.
Posted by Randall Bytwerk at 3:38 PM No comments: