I have a page of Nazi war art on the GPA.  One of the paintings is by Franz Eichhorst.  It was titled “Remembrance of Stalingrad.” 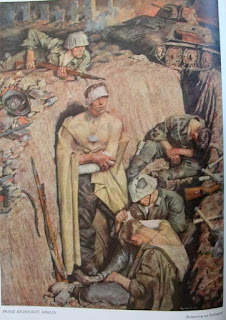 
“The pale colors, the splendid presentation, and the solemnity of the moment are emphasized in this picture, which has an almost monumental character. Although the painting demonstrates the artistic understanding of the painter and also his mastery of drawing, one forgets it all because of the artist’s splendid work, accepting it as obvious and given. That is probably the best that a painting can do.”

It turns out that the painting ended up in Hitler’s personal collection and disappeared after the war.  It was just found in a Czech monastery along with six other paintings.
Posted by Randall Bytwerk at 9:26 AM No comments:

I often get requests for high definition images of material on the German Propaganda Archive.  Recently, I provided some images to an amazing Chinese magazine, The Outlook Magazine.  They wanted images of Nazi racial wall charts for an article on propaganda in the January 2012 issue.  That is not on-line yet — I’ll add a link when they post the issue.
Posted by Randall Bytwerk at 8:29 AM No comments:

In March 1939 the Gauleiter of Vienna, Josef Bürckel, launched a campaign against alleged Jewish commercial misdeeds in Vienna.  A variety of posters were issued immediately after, two examples of which are below. 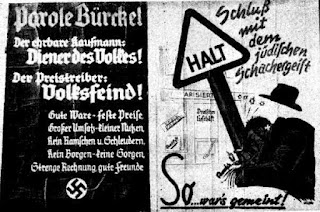 The first poster states: “Bürckel Says: The honest merchant is a servant of the people! He who charges excessive prices is an enemy of the people! Good products — fixed prices. Higher sales — Less exploitation. No hoarding or dumping prices. No borrowing — No worries. Clear bills — Good friends.” The second has a direct anti-Semitic theme: “Down with the Jewish bargaining spirit!” These were printed in Das Kleine Blatt, a Vienna newspaper.
Posted by Randall Bytwerk at 10:24 PM No comments: