Back in 2012 a Chinese translation of my book Bending Spines: The Propagandas of Nazi Germany and the German Democratic Republic appeared.  Shortly after publication the Chinese government ordered the publisher not to distribute further copies.  About a year after that, the ban seems to have been lifted. 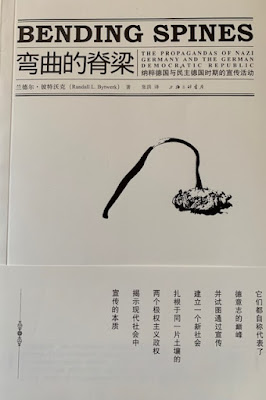 A Chinese contact tells me that the ban is again in force and that the book is again unavailable.

Some copies did circulate and there are a variety of interesting comments on Douban, a Chinese book site.

The Chinese government exerts substantial control over what can appear, both in print and on the Internet.  A reader of this blog informed me that copies of an atlas were seized from his school, since one of the maps depicted Taiwan in a different color than the People’s Republic of China. I was surprised that the book was published in China to begin with, given its suggestion that Marxism-Leninism (and by extension its Chinese variant) were comparable in some ways to Nazi Germany.

Posted by Randall Bytwerk at 2:17 PM No comments:

Late in the war the Nazis revived an old  propaganda method, the discussion evening.  These were to be gatherings where party members could discuss the themes of the day, then transmit the material to others.  I’ve got a variety of such material on the site, and have recently added late-1944 material  about what to say regarding the United States.

The problem the system faced is that people didn’t need to be persuaded to fear the Russians, but many Germans thought victory by the Western allies wouldn’t be nearly as bad.  This material is an example of Nazi attempts to combat that view. 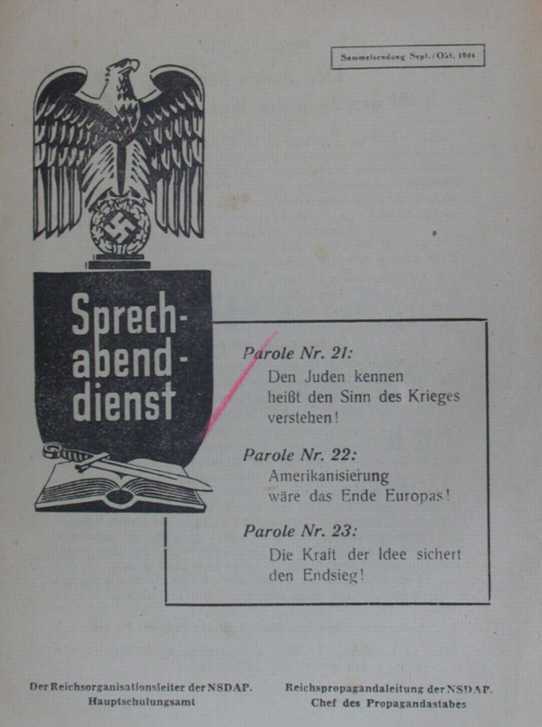 Posted by Randall Bytwerk at 11:43 AM No comments:

Julius Streicher was convinced that there was an international Jewish conspiracy involving every single Jew on the planet.  Today I’m adding a 1942 article that asserts a Jewish gathering in Moscow provided proof of that conspiracy.  The orders from Jews in Moscow allegedly would be followed by their racial comrades wherever they might be. 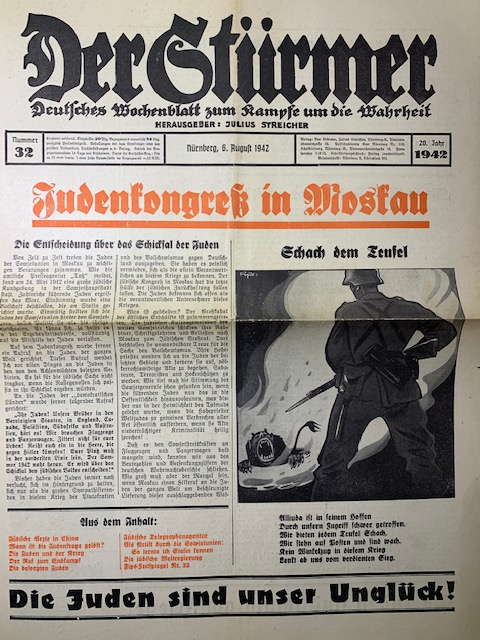 The cover is by Fips (Phillipp Rupprecht), the regular Stürmer cartoonist. Its title: “Checking the Devil.”
Posted by Randall Bytwerk at 12:01 PM No comments:

Nazi Perspectives on the Battle of Britain

I’ve added two Nazi magazine articles from September 1940, published at the height of the Battle of Britain.  The first, titled “Why London Is Burning,” argues that England is only getting its just desserts for having violated the laws of war in fighting Germany.  The second, published two weeks later, “The Delayed Invasion,” explains why the fact that England has not yet been invaded is of no significance since England is doomed, invasion or no invasion.  Both articles were probably written by German propagandist Hans Fritzsche.

They were the lead articles in Das Reich, the prestige German weekly.  Goebbels usually wrote the leads, but for the period June-December he did not, probably because Das Reich was new and payment details had not yet been worked out.  Goebbels liked to be well-paid.
Posted by Randall Bytwerk at 11:30 AM No comments: