A People on the Defensive (Goebbels in 1945)

Goebbels prided himself (not always accurately) at telling the truth, or at least as much truth as was useful under the circumstances.  Up until the Battle of Stalingrad, propaganda was relatively easy to make.  True, there were occasional setbacks, but he would point out that was to be expected in war.

By early 1945, he could no longer speak of occasional setbacks.  The Soviets had begun a major offensive on 12 January 1945 that quickly overran German positions and took them across the German border of 1939,  Germany was now fighting on German soil (and the Western allies were on German soil to the west).

In an essay dated 11 February titled “A People on the Defensive,” Goebbels admits the military situation is grim, but still makes empty arguments that Germany will win in the end if only it steadfastly continues the war.  His promises were empty and by then most Germans realized that the war was lost, but the one effective argument Goebbels had was fear of the Soviets.  This article discusses only the Soviets, not even mentioning the presence of Allied troops on German soil to the west.
Posted by Randall Bytwerk at 3:48 PM No comments:

Nazi racial laws got complicated, sometimes  leaving people in distressing situations.  Today I’m adding a Q & A column from Der Hoheitsträger, a Nazi monthly for party officials at the local group leader level and above. 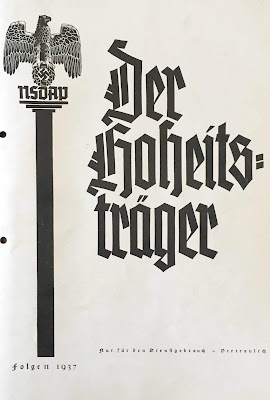 It deals with such awkward issues as what to do if a city employee discovers that his wife is half Jewish. The answer: divorce her or resign the job.
Posted by Randall Bytwerk at 11:18 AM No comments:

How to Use a Nazi Wall Poster

The Parole der Woche was a weekly “wall newspaper” issued by the Nazi Party.  There are a variety of examples on the German Propaganda Archive. The issue below is from 1940 and promotes the idea that World Jewry was out to destroy Germany. 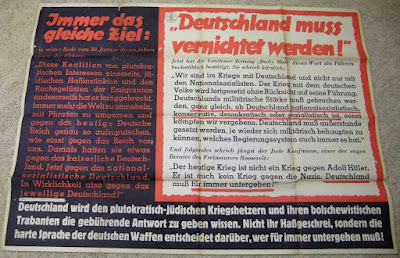 Today I am adding a 1940 article from Unser Wille und Weg, the monthly for propagandists, that encourages greater use of the poster.  Old editions were not to be discarded, but reposted in different locations.
Posted by Randall Bytwerk at 10:03 PM No comments: