More on “Yankee Beetles” in the GDR

The GPA has material from a 1950 East German pamphlet accusing the United States of dumping potato beetles on the GDR. 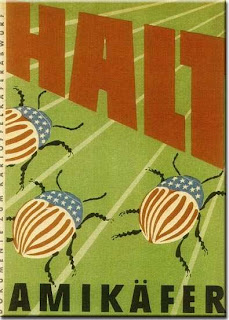 The BBC recently did an interesting story on the topic, including interviews with people who were East Germans at the time and who found themselves in the fields with the unpleasant task of plucking potato beetles from the undersides of leaves.  They were rather dubious about the charge, they recall.
Posted by Randall Bytwerk at 8:36 AM No comments:

I particularly like to add ephemera to the GPA — pamphlets and other items that were produced in large numbers, but not intended to grace library shelves for coming generations.  Today’s addition is a remarkable pamphlet titled International Ethnic Mush or United National States of Europe?  It was published in the first half of 1941 by Robert Ley, head of the Nazi labor organization and a person unsavory even by Nazi standards. 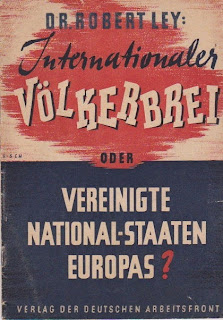 The print run was 2,000,000, and I assume it was widely distributed.  It is filled with crude anti-Semitism and a fair amount of Germanic pride.  Ley tells his readers that they are the master race that has earned the right to rule Europe.
Posted by Randall Bytwerk at 3:22 PM No comments:

Today I’m adding what was probably Julius Streicher’s last major speech, delivered on 31 October 1939.  He was in considerable difficulty at the time, and was shortly afterward exiled to his country estate outside Nuremberg. 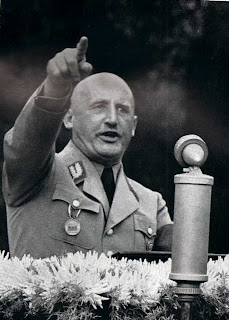 World War II was in its “phony war” stage.  Poland was defeated, but little was happening on the battlefields.  Streicher includes his usual anti-Semitic arguments and encourages his audience to have faith in Hitler.
Posted by Randall Bytwerk at 4:01 PM No comments:

An interesting new site on German propaganda includes a wide range of images of anti-Semitic material from 1930-1945.  It’s based on the remarkable collection of material held by the site’s owner.
Posted by Randall Bytwerk at 2:41 PM No comments: