The German Propaganda Archive focuses on material from the German side, but now and again I come across interesting related material worth noting.  The George C. Marshall Foundation has just put up a collection of Allied leaflets from World War II. 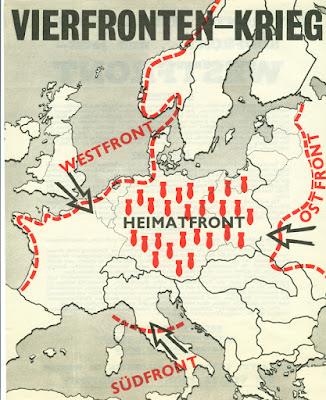 The site has images and translations.  Definitely worth a look.
Posted by Randall Bytwerk at 5:42 PM No comments:

When World War II began, Germany immediately banned listening to foreign broadcasts. This was difficult to enforce, although there were a fair number of cases in which people turned in neighbors whose radios they overheard were tuned to enemy stations.  Another way of dealing with the situation was to insist that  radio receivers have a tag on a knob warning people against listing to the wrong stations. 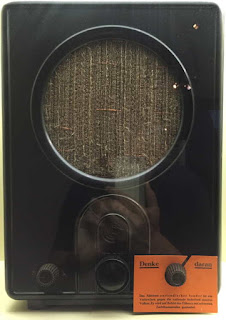 Nazi block wardens, the lowest echelon of the party’s apparatus, were expected to check on the presence of the tag when visiting.  This was not popular.
Posted by Randall Bytwerk at 2:41 PM No comments:

Two days back I posted an item from Gau Sachsen.  I decided to add the rest of the material I gathered from a recent visit to the German National Library in Leipzig.

It consists of seven issues of a newsletter to propagandists and one issue of advice for propagandists holding evening discussion meetings with party members. The party members were expected to use the material in their conversations with friends and work mates.  A particularly interesting aspect to the material is its reliance on enemy newspapers and magazines.  By the end of the war Germans had decreasing confident in their own media, which steadily predicted final victory even as German forces steadily retreated.  Unused to material in their press that did not support the party line, such material was persuasive (and often taken out of context).
Posted by Randall Bytwerk at 7:04 PM No comments:

The Nazi propaganda apparatus functioned almost to the end.  Today I’m adding advice to propagandists in Gau Sachsen at the end of January 1945. A major Russian offensive had begun two weeks earlier.  The Battle of the Bulge was no longer a bulge.

The material does its best to find reason for hope, giving propagandists the outlines of arguments to use in talking with their fellow citizens, but any half-aware propagandist knew by then that things were grim.
Posted by Randall Bytwerk at 4:51 PM No comments:

I have a large section on the Wochenspruch der NSDAP, a weekly series of quotations with inspiring quotations issued between 1937 and 1944.

However, other branches of the party issued quotation posters as well.  Today I added numerous Hitler Youth quotation posters, the result of a recent visit to the German National Library in Leipzig which has about 30 of them from 1940.  They are not as graphically interesting as those issued by the Reichspropagandaleitung. Here is an example: 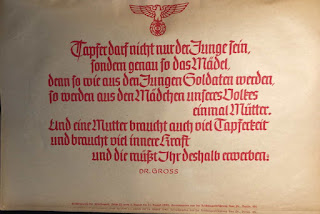 This one has a quotation from Dr. Walter Gross, a leading Nazi racial theorist, encouraging girls to become mothers.
Posted by Randall Bytwerk at 9:05 PM No comments:

For some years a colleague and I have been working to discourage the use of a dubious quotation by Joseph Goebbels:


“If you tell a lie big enough and keep repeating it, people will eventually come to believe it. The lie can be maintained only for such time as the State can shield the people from the political, economic and or military consequences of the lie. It thus becomes vitally important for the State to use all of its powers to repress dissent, for the truth is the mortal enemy of the lie, and thus by extension, the truth is the greatest enemy of the State.”

No one ever provides a source for the quotation.  Our point is not that Goebbels always told the truth, but rather that an effective propagandist is unlikely to say in public that he lies. Goebbels prefered to tell the truth, or at least part of it, whenever possible, since clear lies reduce the effectiveness of propaganda.

I recently came across an interesting 1940 Nazi poster announcing Goebbels’s love of truth: 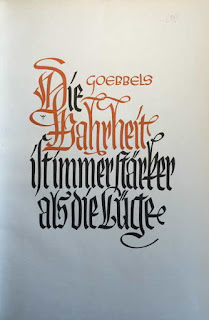 The truth is always stronger than the lie

In 1940 it was easy for Goebbels to tell most of the truth most of the time, since Nazi forces were winning on every front.  In 1945, to the contrary, he had a problem  Although he told some bald-faced lies then, he more often resorted to vague claims that Germany would somehow still win the war because of its insurmountable will.
Posted by Randall Bytwerk at 11:41 AM No comments: