Hitler justified his invasion of the Soviet Union by claiming that he had acted at the last minute to prevent a Soviet attack on Germany. Today I've added an article titled "The Meaning of the Battle," taken from Signal, an illustrated magazine published twice monthly in many languages for foreign consumption. The map below shows the alleged placement of Soviet troops preparing to attack Germany.

In praise of the Berlin Wall

A little late for the 20th anniversary of the end of the Berlin Wall, I'm adding parts of an East German pamphlet released shortly after the Wall was erected. It praises the Wall as a victory for peace and socialism, and a defeat for West German militarists. It has an interesting section in which a veteran of the forces that built the Wall looks back 100 years later, and takes pride in his achievements. Things didn't quite turn out that way. 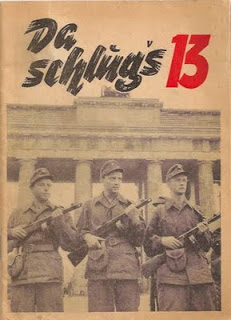 Posted by Randall Bytwerk at 8:36 PM No comments:

The Case of the Curious Translation of Mein Kampf

Ordinarily, I post items here that relate directly to the German Propaganda Archive. This is one of the occasional exceptions.

Two months back, I was reading the Wikipedia article on Mein Kampf. According to said article, the finest translation was that by one Michael Ford. That interested me. I know a lot about Mein Kampf, and I had never heard of it. I looked into it. Ford, as it turned out, had self-published the translation, then using the anonymity offered by Wikipedia, and in violation of its policies, had inserted the high praise. I removed those edits. When he discovered that a month or so later, he tried to re-insert his praise of his own book, but the violations of Wikipedia policies were so clear that others promptly reverted his edits as fast as he made them. He's given up on that, at least for the moment.

Then I want to amazon, where I found the book was selling well, in part due to a number of 5-star reviews that appeared suspiciously soon after the book’s publication last summer. He had also published a book that promoted his translation, claiming he had the only “correct” translation, one that remedied all sorts of previous errors. Mr. Ford is clearly a master of self-promotion. He is, by the way, a self-described entrepreneur whose other books include how to avoid being scammed on eBay and finding a job if you are a felon. Despite my requests, he has not provided any information on his background that would make one likely to trust his ability to translate Mein Kampf, which is a challenge even for experienced translators.

I posted a negative review, pointing out some typical howlers in translation that he had committed. If you are curious, look up my review on amazon. To date, Mr. Ford simply repeats that his version is the only “correct” one, and claims that it is the standard translation. For obvious reasons, he cannot provide the names of significant scholars in the field who agree with him.

In the meanwhile, Mr. Ford has won the support of a band of “historical revisionists” who are involved in web sites that try to appear as “objective” scholarly sites, though a quick read reveals their nature. I do not think Mr. Ford himself has such tendencies — but he is happy to accept the support of anyone who approves of his work, as best as I can tell.