One more Nazi speaker directive — this one telling speakers how what to say about Italy’s “treasonous” act of deposing Mussolini.  The basic argument is that Italians thought they could get out of the war by surrendering, but the material says neither the Allies nor the Germans will let them.  The evidence was a variety of citations from the Allied press along with some from Nazi-occupied Europe.

The same argument was used for the remainder of the war: the Allies will make wonderful promises before they take over, but forget them afterwards.  They were using similar arguments in the spring of 1945.
Posted by Randall Bytwerk at 9:54 AM No comments:

I’ve been working at the German National Library in Leipzig this week, adding a burst of material as those those who follow this blog will have noticed.  Today I add two items from the Zeitschriften-Dienst.  This was a weekly newsletter that went to all magazine editors with material to incorporate into their publications.

First, there are guidelines from August 1939 when the German-Soviet agreements shocked the world and prepared the way for Hitler’s attack on Poland. This was a remarkable shift in German policy, which throughout the previous years had argued that Bolshevism was a great threat to the world. The material focuses on the economic benefits to Germany of the alliance and tells journalists to avoid all ideological matters.

Second is the directive from June 1941. Now the emphasis is on the great ideological differences between the two totalitarian states. The invasion started well from the Nazi perspective, and at the end of the article editors are told to remember that the invasion of the Soviet Union is a phase in the greater war against England. Things turned out a bit differently.
Posted by Randall Bytwerk at 5:53 AM No comments:

The most prominent Nazi anti-Semite after Hitler, Julius Streicher was also Gauleiter of Franconia.  In that office he gave a speech on 5 January 1939 to the block wardens and cell leaders of his Gau.  These were low-level party volunteers who tended to pester their neighbors with requests for donations, attendance at political meetings, etc.  They were not always popular.  This is something of a pep talk, telling them how important they are and how much he depends on them.  He also explains that any comedian poking fun at them will face his wrath. 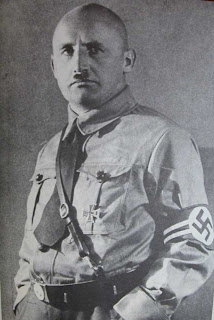 Before the end of the year Streicher was deposed from office for rather gross misconduct.
Posted by Randall Bytwerk at 3:38 AM No comments:

Nazi Speaker Information on Fashion and British Plans for Germany

Over time I’ve been adding to the archive material intended for Nazi speakers.  This material was then used by thousands of speakers to discuss the Nazi propaganda line in public meetings throughout Germany.  Today I am adding two editions.  The first is from March 1943, and attempts to deal with an unintended consequence of Goebbels’s February 1943 speech on total war.  He had called for the elimination of luxuries, but some over-eager citizens thought they were following his instructions by insulting well-dressed women.  Speakers are to say that it is still good for women to take care in their appearance.

The second edition is from mid-February 1944 and expresses outrage at English Lord Vansittart’s discussion of re-educating the Germans after the war. It also discusses Allied carpet bombing.
Posted by Randall Bytwerk at 6:19 AM No comments:

Since Einstein was Jewish, the Nazis were compelled to argue that his theory was nonsense and that he himself was up to no good.  There was a surprising amount of anti-Einstein propaganda after 1933, more of which I may add over time.  Today I add a 1939 article from Mitteilungen über die Judenfrage, a publication of the Institut zum Studium der Judenfrage, the most prestigious of the anti-Semitic scholarly enterprises during the Third Reich. Titled “Albert Einstein: The ‘Tourist Attraction’ of Princeton,” it says that there is nothing new in the Theory of Relativity (or if there is, Einstein plagiarized it), and that he is up to evil deeds as he abuses American hospitality.
Posted by Randall Bytwerk at 8:09 AM No comments:

The Titanic in Nazi Propaganda

I did an interview with Alex Gallafent from Public Radio International today on Titanic, the 1943 Nazi film on the subject.  It’s the program for April 12, and the interview starts at minute 24.

The text of the story is available.
Posted by Randall Bytwerk at 5:28 PM No comments:

My colleague Quentin Schultze and I will shortly publish an article on the fabricated quotation by Joseph Goebbels that I have discussed in the past on this blog.  I will provide details when it appears.

Meanwhile, we have started a blog to follow the spread and use of the quotation — and, we hope, its gradual disappearance, although we have no high expectations that two professors will be able to do much to stop its spread.
Posted by Randall Bytwerk at 1:16 PM No comments:

A while back Ian Garden wrote to me with the request for some high definition scans of images from the GPA for a book he was writing on Nazi cinema.  As usual I asked for a copy of the book when published. The British edition of the The Third Reich’s Celluloid War arrived by mail a month or so back. It now is available in the U.S.

I recommend the book as a good introduction to the subject.  As Garden notes in the introduction, he is writing for a general audience and he does that well.  The book provides interesting information about a wide range of Nazi film.  The book as a particularly good selection of images, some in color.  No other book on the topic can equal it in this regard.

The author has also set up a useful web site to supplement the book. 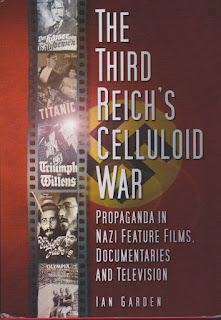 There are a few matters of fact and interpretation about which I might quibble, but when my students ask me for help on where to start in understanding Nazi film this is the first book to which I will send them.
Posted by Randall Bytwerk at 9:34 PM 1 comment: