In Mein Kampf, Hitler writes that Germany would not have lost World War I if 12,000 - 15,000 “Hebrew corruptors of the people” had been killed with poison gas.

There were not a lot of such suggestions in Nazi propaganda before 1933 of killing Jews en masse, but Julius Streicher’s Der Stürmer did run occasional cartoons like this one that I am today adding to the page on pre-1933 cartoons from Der Stürmer. 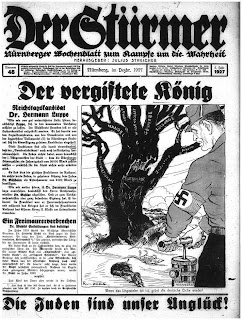 A Nazi is pumping poison gas into a tunnel beneath an oak tree representing Germany. Dead Jewish rats are strewn about.  The caption: “When the vermin are dead, the German oak will flourish.”
Posted by Randall Bytwerk at 2:39 PM No comments:

1937 was a big year for art in Munich.  The new Munich art gallery opened, at which annual displays of approved Nazi art were held until 1944.  And there was a festival titled “Two Thousand Years of German Culture.” 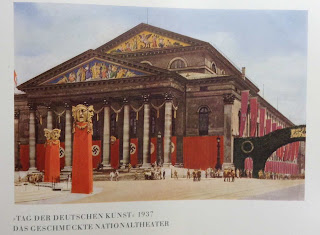 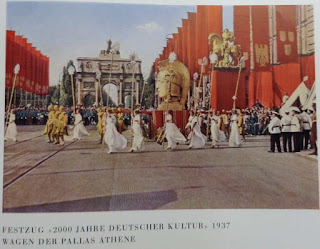 Posted by Randall Bytwerk at 2:37 PM No comments: