The newest page provides examples of Nazi caricatures on domestic  themes. Since it was not possible to criticize much about life in the Third Reich, cartoonists naturally focused on enemies beyond Germany’s borders. 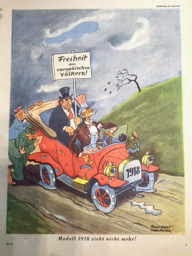 A 1943 cartoon claiming that German morale is so strong that the collapse of 1918 will not be repeated.

Cartoons that addressed domestic themes had to reinforce the war effort or go after those the Nazis didn’t like. Complainers and gossipers were standard targets. Just after Stalingrad, Germans were told that personal comfort was far less important than tanks.

There was never, of course, any criticism of Nazi leaders or policies.

Posted by Randall Bytwerk at 10:24 PM No comments:

Nazi Caricatures on Stalin and the USSR

I’m adding pages of Nazi caricatures on the USSR and Joseph Stalin.  With the exception of the period between August 1939 and June 1941, the Soviet Union was always a target of Nazi propaganda. The Soviets, in fact, were much worse than the French, British, and Americans, as they were under the rule of an evil competing ideology. 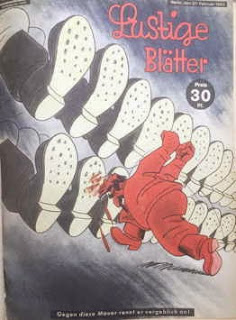 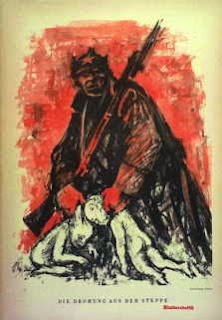 The perspective changed over time. In the 1930’s, Nazism presented the Soviet Union as a land of mass butchery (for which there was more than adequate evidence).  Once the war began, the Soviets were a threat not only to their own citizenry, but to the entire world.
Posted by Randall Bytwerk at 4:43 PM No comments: