I’ve had a long interest in the lower levels of the Nazi propaganda system.  It had tentacles reaching down to the neighborhood level.  These propagandists needed to be instructed.  The Reichsring für nationalsozialistische Propaganda und Volksaufklärung was the subsection of the party propaganda office responsible for that.  Today I’m adding the January 1944 newsletter for the lower Danube area. 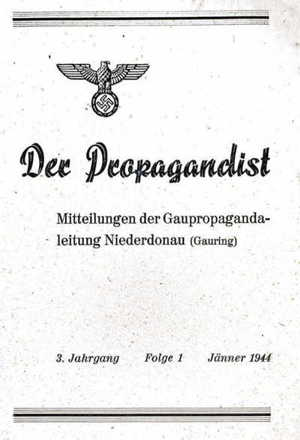 It discusses Allied bombing, street collections for the party charity, occupational choices for the youth, and more.
Posted by Randall Bytwerk at 11:03 AM No comments:

In 1943 the Nazi party’s illustrated magazine ran a series of back page cartoons titled “The Latest from God’s Own Country” satirizing the United States.  I find them interesting, and may add a page of them one of these days.  Meanwhile, here is an example from the Illustrierter Beobachter in March 1943. 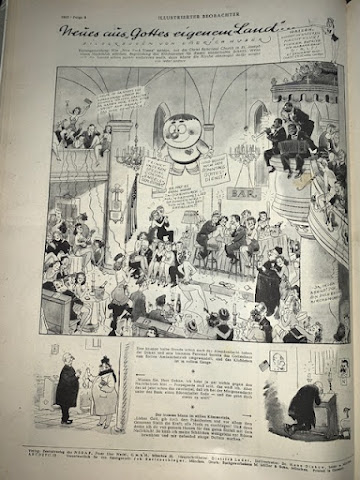 The occasion was a report from the New York Times that Christ Episcopal Church in St. Joseph had turned itself into a nightclub for the youth. At the bar, a gentleman says “He would be happy if we occasionally sang a pious hymn.  Let’s do him that favor.”  At the bottom, the priest is praying under pictures of FDR and Stalin: “Dear God, give the President and above all Comrade Stalin the strength to clobber the Nazis! And I thank you from the depths of my heart for the great success of our night club! I can protect my sheep from evil and even make a few dollars.” The woman talking to the deacon says: “You know, Deacon, I have nothing against the nighttime activities here —there must be propaganda, I know — but this is the second time I found a bra underneath the pew during morning prayers — that is going a bit too far.”

Posted by Randall Bytwerk at 12:44 PM No comments: