A 1932 Nazi Pamphlet for the Communists

I’m continuing to add early Nazi propaganda material to the site.  Today, I add a translation of The Bolshevist Swindle, a pamphlet published early in 1932 that was directed to the communists. It takes most German communists to be honest but deluded workers, and tries to prove that Stalin’s policies in the Soviet Union are worse than those of any Western capitalism.  At about the same time, a pamphlet by the same author titled The Sensationalist Newspapers Lie!  was released that was directed at the Socialists. 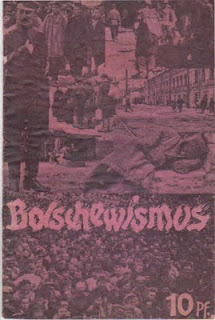 There are other pamphlets from the period on the GPA as well, including several published during the March and April 1932 presidential elections.  They demonstrate how serious the Nazis were in adapting their appeals to reach the most disparate audiences.
Posted by Randall Bytwerk at 2:44 PM No comments:

I’m gradually adding translations of material from before 1933.  Today, I’m posting an interesting pamphlet titled Hitler to Brüning. It’s the text of Hitler’s response to Chancellor Brüning’s emergency decree of early December 1931, which among other things banned political uniforms, meetings, and insignia.  Brüning at the time lacked a parliamentary majority and was maintained in power by Reich President Hindenburg, who under the Weimar Constitution had the authority to permit that. 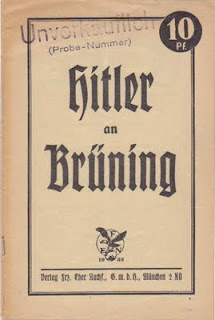 It is an interesting example of Hitler’s rhetorical style — and was at the time persuasive not only to his Nazi followers, but probably to many others as well.
Posted by Randall Bytwerk at 12:45 PM No comments: