A 1937 Oil Painting of Adolf Hitler

There were enormous numbers of paintings of Hitler during the Third Reich.  The annual Greater German Art Exhibition in Munich generally had several.  This one comes from the 1937 exhibition, and is the work of Heinrich Knirr (another of whose Hitler oil paintings is also on the GPA. It comes from Die Kunst im Dritten Reich, the glossy art magazine published by the Nazi Party. 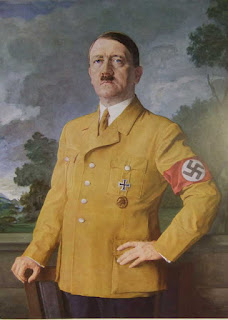 This and other art pieces depicting Hitler are available on the Hitler portraits page.
Posted by Randall Bytwerk at 5:43 PM No comments:

1933 Books on Zeppelins Free to a Good Home

Every now and again people send me interesting books to use in building the web site.  Sometimes, they are not really relevant to my interests.  One such recent acquisition is a two-volume illustrated history of Zeppelins.  These are soft-covered volumes with pictures pasted in. The first was published in 1932, the second after the Nazi takeover in 1933. There was a third volume published in 1937, but that I do not have. 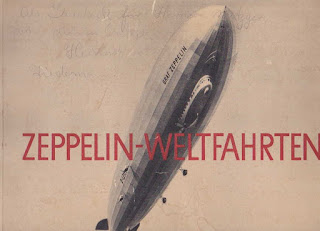 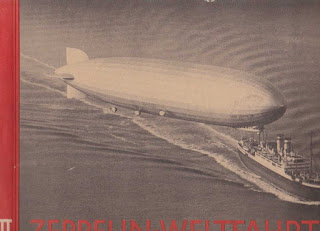 I will send them (no charge) to someone who has a demonstrated research interest in the subject.  They have some value (copies sell for around $300), but I’m looking for a graduate student or scholar interested in the topic who can persuade me that he will put them to good use, not run to the nearest used book dealer.  Drop me a note (my e-mail address is available on the GPA FAQ page).
Posted by Randall Bytwerk at 11:47 AM No comments:

While looking for other things I came across this vivid cartoon from  Der Schulungsbrief (#1/2/3 of 1942).  This was the Nazi Party’s periodical for “political education.”  Households were strongly encouraged to subscribe. 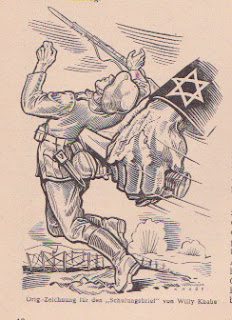 It portrayed the Nazi legend that Germany had won World War I militarily, only to be stabbed in the back by Jewish traitors in the homeland.  It’s interesting that this appeared early in 1942, after the invasion of the Soviet Union had not proved as successful as expected.  Discerning Germans by then were beginning to realize that the war could be lost — an idea propagandists wanted to discourage by suggesting that the only way Germany could lose was through treason.
Posted by Randall Bytwerk at 5:42 PM 1 comment:

The Nazi Edition of the Protocols of the Elders of Zion

My current project is a study of the uses to which the Nazis put the astonishing forgery The Protocols of the Elders of Zion.  That document purports to be the records of a secret Jewish conclave that discussed progress in the Jewish campaign to take absolute world power.  It is popular today in the Arab world (Egyptian television apparently did a series based on it), but even in the United States there are adherents. Look over the discussion page for the Wikipedia article on the Protocols if you are curious to see some of its believers struggling to defend its authenticity.

The Protocols were first published in German shortly after the end of World War I. There were a variety of editions, but the most successful was that by Gottfried zur Beek (a pseudonym for Ludwig Müller von Hausen). It was taken over by the Nazi Party’s publishing house and had at least 22 printings.  I have not been able to determine the number of copies printed, but it has to have been in the millions. 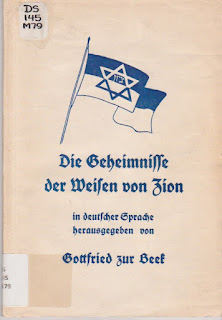 The 1938 edition shown above included a lengthy introduction that attempted to prove its genuineness that I add to the GPA today. It makes remarkable reading.  The author (whose name is not given) follows the usual methods of such conspiratorial nonsense — providing a wide variety of “evidence” that does not hang together in a way that supports the case.
Posted by Randall Bytwerk at 4:20 PM No comments: