Today I’m adding another issue of the Redner-Schnellinformation issued by the Nazi Party’s Reichspropagandaleitung. It went to the party’s corps of speakers throughout the country. This one dates to August 1942, the last point at which from the Nazi perspective the war was going well. The summer offensive had gained a lot of territory, and the public was longing for an end to the war that year.  Speakers were ordered to avoid encouraging that thought in any way.  It was far better to announce victories once they had actually been won rather than to build false hopes that, when dashed, would damage morale.
Posted by Randall Bytwerk at 12:24 PM No comments:

I’ve been working on a project that has me wandering through German newspapers, and occasionally encounter speeches by Nazi Gauleiter, for which I have a small but growing page on the GPA.  Yesterday I came across a late-March 1939 speech by Robert Wagner, Gauleiter of Baden.  It was delivered just after Hitler had taken over Bohemia, Moravia, and the Memel District (although he had claimed the previous September that the Sudetenland was “my last territorial demand in Europe”).  It displays the height of Nazi confidence in Hitler — he seemed completely irresistible. Wagner basically tells his audience that Germany is going to do what it wants, despite the “lies” that the rest of the world may spread about a Germany that is only after its rights.
Posted by Randall Bytwerk at 10:58 AM No comments:

The Bildbericht der Woche was a weekly film strip issued by the Nazi Party’s propaganda office, the Reichspropagandaleitung.  It was intended for use in the countryside or neighborhood meetings where people were less likely to attend a movie theater to see the weekly newsreel.  About 1575 copies were produced each week in 1941.

This is #12, issued in late March of 1939 just after Hitler had taken over the rest of Czechoslovakia and bullied Lithuania into returning the Memel district, which had been lost under the Treaty of Versailles.  The speaker presenting the show would have had a text to read explaining each picture, which I unfortunately do not have.  Should you be able to identify any of the pictures more precisely than I have been able to do, kindly let me know. 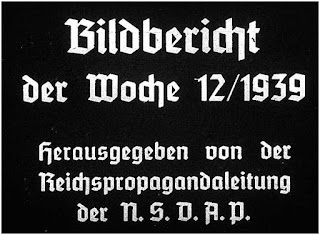 Posted by Randall Bytwerk at 4:36 PM No comments:

1938 Nazi Editorial Cartoon on the USA

After the Munich Agreement that turned over the Sudetenland to Germany, the U.S. grew increasingly worried about Germany.  The German side generally reacted vehemently to any criticism from abroad. This editorial cartoon appeared in the Wiener Neueste Nachrichten of 29 October 1938. 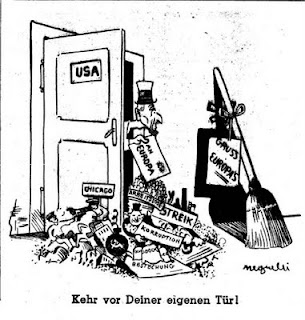 The caption loosely translates as “Clean up your own mess!”  A Jewish looking figure from the U.S. is about to dispatch a message to Europe, only to find a broom sent from Europe to clean up America’s problems.  The items in the mess are Chicago (gangsters), strike, corruption, bribery, a communist bomb, unemployment, and sacks of money.
Posted by Randall Bytwerk at 9:03 PM No comments:

I’ve not been adding much to the GPA lately, given other projects.  Today, however, while looking for something else I came across a 1938 speech by Gauleiter Robert Wagner (Baden), delivered to a party gathering in 1938.  I’m slowing building a page of speeches by the various Gauleiter, so I took the time to translate this one. 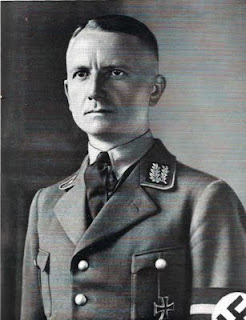 Posted by Randall Bytwerk at 8:10 PM No comments:

Every so often I decide it’s time to sell something so as to be able to buy other things.  Today, I’m adding Leni Riefenstahl’s 1935 book Hinter den Kulissen des Reichparteitag-Films (“Behind the Scenes at the Reich Party Rally Film”), published in 1935.  It is a soft-cover book of 104 pages with numerous photographs and what is purportedly Riefenstahl’s text (she later claimed she had not written it).  It is rarely offered for sale. 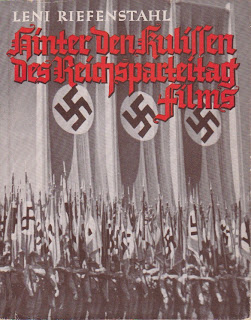 It even has a slip inserted with a note from Adolf Hitler praising the book: 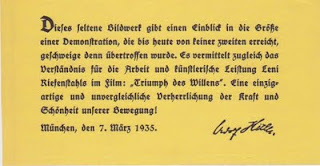 If you are interested in Riefenstahl, this is a book you will want to have. Take a look at my German Propaganda Book Shop for the details.
Posted by Randall Bytwerk at 9:41 PM No comments: