Those who admire P. G. Wodehouse, which should be about everyone, may be interested in an article I recently published in Plum Lines: The Quarterly Journal of The Wodehouse Society, Summer 2016.

Wodehouse’s books were published by the Tauchnitz Verlag, which had a long history of issuing English editions of British and American authors for Continental readers.  They published many of Wodehouse’s novels, including some that included brief, but critical mentions of Adolf Hitler and the Nazis. 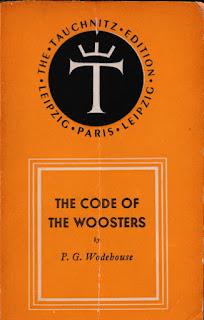 It turns out that Tauchnitz simply cut awkward passages.  The article looks at what disappeared in the editions published in Germany.  If you are interested and aren’t a member of The Wodehouse Society, drop me a note and I can provide a copy.
Posted by Randall Bytwerk at 5:17 PM No comments:

Goebbels was only the top of the Nazi propaganda apparatus.  It extended down to every corner of the country.  Speakers were a major part of the system.  They could be mobilized on short notice, and could be a little more open about some issues than the press.

They needed to be informed, and the party’s Reichspropagandaleitung put out a variety of publications to assist speakers.  The one I find most interesting is the Redner-Schnellinformation (Speaker Express Information) which provided them with material they were expected to put to immediate use.  Although the material had nothing all that confidential (despite the claims that it was “strictly confidential”), it provides a window into the specific content of Nazi propaganda at various times. 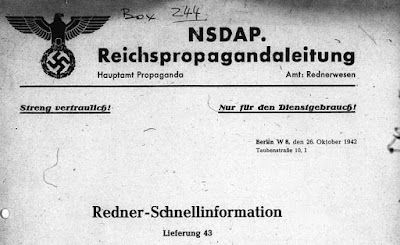 Today I’m adding six new issues, including interesting ones on the Russian murder of thousands of Polish officers at Katyn, training sessions for party members, and the loss of Sicily.

I have now translated all the issues I have access to (with two exceptions that I think of less interest).  Should you know of others I’ve not yet found, please let me know.

Posted by Randall Bytwerk at 8:49 PM No comments: