Propaganda from the 1936 Reichstag Election

I've added a small flyer issued during the March 1936 Reichstag election campaign, during which the Nazis made substantial propaganda efforts even though there was no opposition. It summarizes the economic achievements of the first  three years of Nazis rule.

The first picture is of the front cover the second of an interior page showing the increase in employment after three years of Nazi rule. 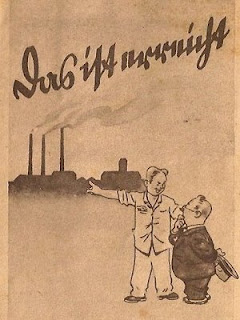 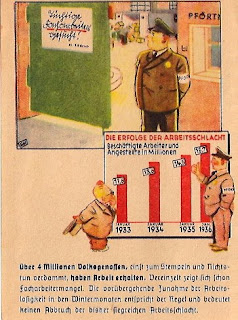 Posted by Randall Bytwerk at 8:37 AM 2 comments:

In 1935, Paul von Mendelssohn-Bartholdy, a prominent Jewish banker, died in Berlin. He was also an art collector, and his art wandered off in unclear ways after his death. In Fall 2008, I got a call from the lead attorney for a group of his descendants who were claiming ownership of two of the Picassos, which are now in the collections of the Museum of Modern Art and the Guggenheim Museum in New York. They asked for either $400,000,000 or custody of the paintings.
The case was interesting. Case law is clear in cases where Jewish art was seized by the Nazis. In this instance, however, Mendelsson-Bartholdy had turned the art over to a somewhat suspect art dealer before his death, after which the pieces migrated to Switzerland, and eventually to the United States. The museums contended either that he had given the artwork to his wife as a wedding present before 1933, or that he had been under no untoward pressure to sell, and that therefore the heirs had no claim.
The lead attorney discovered several items relating to the family on the GPA, and asked if I could provide copies of them, and perhaps others as well. That turned out to provide several interesting months of research at my end as I provided dozens of relevant items.
I was scheduled to testify at the trial before a federal court in New York early in February, but as often happens, the case settled on the day the trial was to begin. The details of the agreement are sealed, though one can reasonably assume that if one asks for $400,000,000, one does not settle for $500,000.
The settlement got considerable publicity. A later NYT article reported that the judge was unhappy with the secrecy of the settlement, noting that the issue was of larger public interest.
Posted by Randall Bytwerk at 12:10 PM No comments:

The actual peace treating ending World War II was not signed until after the collapse of the GDR. That provided all sorts of occasions for East-West friction during the Cold War. I've added a translation of an 8-page pamphlet from 1954 in which the GDR argues that unlike the Treaties of Bonn and Paris that further integrated West Germany into the Western alliance, a Soviet proposal for a peace treaty would benefit all Germans. It provides a good summary of the GDR's arguments at this point in the Cold War. 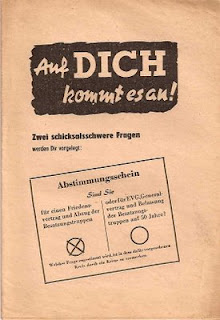 Posted by Randall Bytwerk at 1:00 PM No comments: