The Wochenspruch der NSDAP was a weekly poster with inspiring quotations issued between 1937 and 1944. 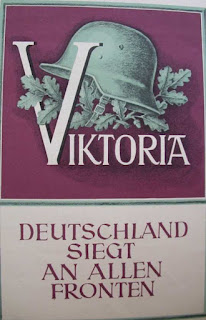 I’m still trying to figure out the full story.  Before mid-1940, many of the individual Nazi Gau propaganda offices issued them, apparently using texts supplied from the Reichspropagandaleitung in Munich — but not all of the time.  Some would release issues that quoted the local Gauleiter, for example.  The same quotations show up in different areas with different dates.  After mid-1940, nearly all were issued by the Munich office, but Gau Sachsen, at least, issued its own until into 1941.

The total number is well over a thousand.  I began with a modest page on them early in the GPA, but I kept buying more, and collectors send me images of others.  The collection grew from one page to two — and now I am splitting it into more pages.  The index page provides full details.  Although a comprehensive listing is probably impossible, but my collection is the most comprehensive available. 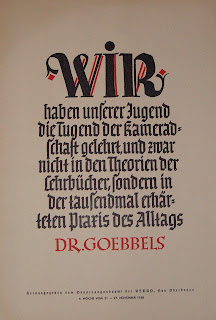 If you have ones I do not have, I welcome assistance in building the collection.
Posted by Randall Bytwerk at 11:15 PM No comments:

Another 1941 Speech by Gauleiter Eigruber

I had a little time this afternoon so I translated another speech by Gauleiter August Eigruber, this one on the invasion of the Soviet Union. It was given two days after Hitler ordered the attack.  Like most German propaganda at the time, Eigruber saw the invasion as a brief interruption in the war against England. 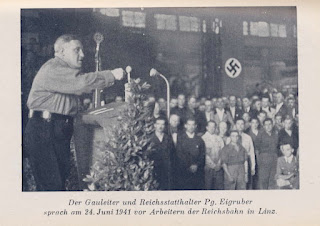 I’d be interested in following Eigruber’s rhetoric as the war went on, but this is the last speech in the book of his speeches that I am working from.  As the Austrian ANNO project continues to add digitized newspapers as the 70-year copyright limit is reached I may be able to find more speeches.
Posted by Randall Bytwerk at 4:22 PM No comments:

A 1941 Speech by Gauleiter Eigruber

I am gradually adding material by the various Nazi Gauleiter, that party’s regional bosses.  This material is not particularly easy to find.  I recently got a copy of a book of speeches by Gauleiter Eigruber of the Linz area (Oberdonau), and will likely add several of his speeches. 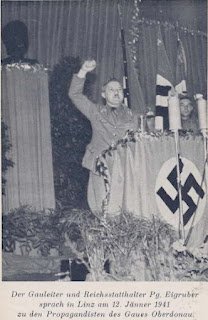 Today I add a speech from January 1941 to the propagandists in his area.  We tend to think of Nazi propaganda as well organized and developed, but about 10% of the citizens of his district had never ridden on a train, and many still had no electricity.  They depended on battery-powered radios to listen to Nazi broadcasts.  Propaganda required face-to-face contact and rather primitive tools.  Gauleiter Eigruber, for example, recommends the one-two punch to knock people telling political jokes to the ground.
Posted by Randall Bytwerk at 12:52 PM No comments:

Alexander Historical Auctions kindly gave me permission to include three images from their recent catalog.  Two are of interesting posters I’ve not seen before.  These posters are now on the poster page covering 1933-1945. 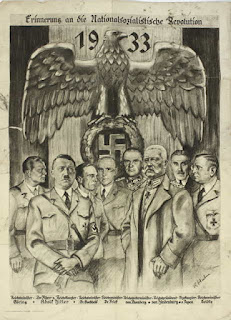 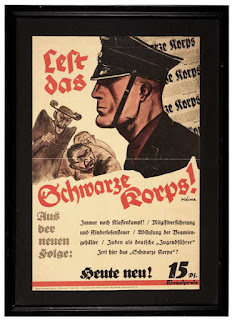 
The next image is what they are confident is one of Hitler’s later paintings, dating to around 1920.  There are a lot of fake Hitler paintings in circulation, but they are an established firm that knows what it deals with, so the chances are they are correct. 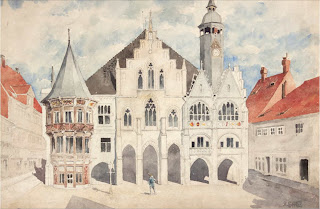 A good general summary of Hitler’s paintings from a 1998 article reprinted by Snyder’s Treasures, another dealer in such items.
Posted by Randall Bytwerk at 9:55 PM No comments: