Fritz Reinhardt was a significant figure in Nazi propaganda.  Before 1933 he instituted a correspondence school that trained about 6,000 Nazi speakers.  He issued a barrage of material to support those speakers.

In 1929 he issued a pamphlet claiming that under the Young Plan, an international agreement on German reparations, Germans would be sent abroad to work for the French.  This is a follow-up pamphlet that appeared in October 1931, making the same claim. 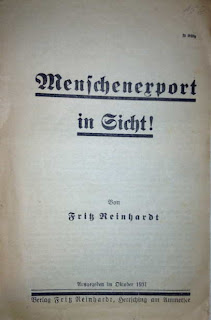 Although like all good propaganda it provides enough evidence to make the argument at least superficially plausible, he does make the astonishing (and completely unsupported) statement that twenty to thirty million Germans would have to be sent abroad under the Young Plan.
Posted by Randall Bytwerk at 11:26 AM 1 comment: