I’ve added two 1935 articles from Unser Wille und Weg, the monthly for propagandists. The first concerns how to make propaganda to farmers, the second criticizes Germans who were only outwardly National Socialists. For those interested in Unser Wille und Weg, issues from 1934 until the final issues in 1941 are available on Google Books.
Posted by Randall Bytwerk at 5:33 PM No comments:

I’ve got a peculiar fondness for Fritz Reinhardt, who appeared in my first published article as the founder of a Nazi correspondence school that trained public speakers. Today I’m adding part of a pamphlet titled The Red Plague, a 1930 attack on the Social Democrats. I’d started out intending to translate the whole pamphlet, but the economic language is tough going so I'm not doing it all.
Posted by Randall Bytwerk at 10:50 AM No comments:

I began the German Propaganda Archive in 1996, the earliest days of the Internet. It has grown over the years and I haven’t always kept up with the latest developments in HTML coding. For a while the pages were not mobile friendly, which Google punishes by moving pages down in ranking. Well, I've just completed a major updating of the coding, and chances are good that I missed something in the process. If you find any pages that don't work, please leave a comment. Also, I always welcome reports of typos or errors. This is a one-person operation. I proofread and spellcheck pages, but things always slip past. Should you see anything that needs correcting, I will again appreciate a comment to that effect.
Posted by Randall Bytwerk at 10:04 PM 2 comments:

A German Cartoon during the Blitz

Every now and then I come across something I don't add to the German Propaganda Archive, but is worth noting. Today it was a cartoon from the Völkischer Beobachter of 8 September, 1940: the height of the Battle of Britain. The Germans were optimistic, having no idea that far worse would descend on them. 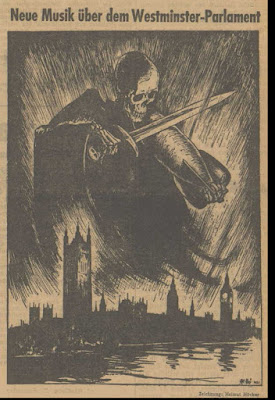 New Music above the Parliament of Westminster
Posted by Randall Bytwerk at 9:35 PM No comments:

I’m interested in the propaganda of the last days of Nazi Germany. What does one say when there is nothing good to say? Today I add parts of a Goebbels speech of 10 March 1945. The Nazis had recaptured the city of Lauban from the Russians, and Goebbels visited the area, giving a speech in the nearby city of Görlitz. His dubious argument was that it proved that the course of the war could still be changed.
Posted by Randall Bytwerk at 11:56 AM No comments:

I have added a rather mediocre article by Helmut Sündermann, a high official in the Nazi Party press department. The title is what attracted by interest: “The Big Lie.” In this case, Sündermann’s claim is that the Allies are using the “big lie” to falsely accuse Germany of being responsible for the war, when in fact he says it has only fought for its self-preservation. The Allies are the warmongers. Given the date, 21 January 1945, it is a weak effort. Given that Germany was being driven back on all fronts, it hardly seemed useful to argue that Germany’s cause was just.
Posted by Randall Bytwerk at 8:10 PM No comments:

One of the pleasures of my archive is finding out how it is useful to others. Recently, some illustrations from my site were used for an interesting project on Black Central Europe. The site is worth a look.
Posted by Randall Bytwerk at 1:55 PM No comments:

Goebbels delivered his penultimate speech over the radio on 28 February 1945, which I am adding today.  His final speech was on 19 April on the occasion of Hitler’s birthday.

The military situation was grim. The Soviets were charging in from the east, the Americans and British from the west. Goebbels had no good news to give, as he commented privately in his diaries.  He was forced to resort to what Earnest Bramsted called the “lure of historical parallels.” If Frederick the great had done it then, Germany could to it in 1945.

For the last few months of World War II the main theme of Nazi propaganda was that if Germans kept fighting, their loyalty and bravery would be crowned with victory.  That began to look thin as time went on.  Today I add an article dated 3 April 1945 that suggested without too much confidence that victory was still possible, but the basic theme was that Vienna was a lost cause, so the Viennese may as well die fighting.

Posted by Randall Bytwerk at 1:17 PM No comments: