The GPA has a page on the Wochenspruch der NSDAP, a weekly poster with quotations intended to be inspiring.  They were posted in public places throughout Germany. According to Nazi sources, about 500,000 were issued each week. After about mid-1940, they were issued by the Reichspropagandaleitung, the Nazi Party’s propaganda office.  Before that, many were issued by the individual Gau propaganda offices, which makes tracking them rather difficult. The Deutsche Nationalbibliothek in Leipzig, for example, has only scattered holdings of the early issues.

A collector often provides me with scans of ones I have not seen before.  Today, I am adding four new ones to the page.  The most interesting is this one: 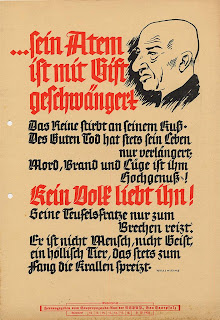 It has a particularly nasty anti-Semitic text (translated on the page — look for the one dated December 12, 1938 from Gau Saarpfalz).

I have three issues of the Wochenspruch for sale should you be interested.
Posted by Randall Bytwerk at 8:52 PM