My book Bending Spines: The Propagandas of Nazi Germany and the German Democratic Republic has been translated into French and Chinese.  The Chinese edition appeared in July, and Chinese contacts tell me that was banned shortly afterward by the Chinese government. 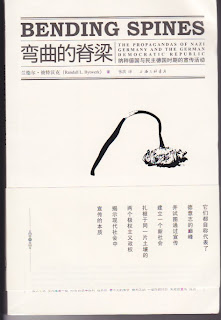 I’m trying to get more details, which I will post here as I learn them.  Apparently the book’s discussion of totalitarianism and propaganda did not meet the approval of the Chinese authorities.

UPDATE:  The book remains available in Hong Kong.
Posted by Randall Bytwerk at 10:37 AM

I just bought and read the Chinese translation of your book. I understand why the Chinese mainland government wants to ban the book, but now the book is available again.
There are some interesting points in the book that reminds me of what the Chinese government has done in the past (specifically before and during the Cultural Revolution), but many statements don't apply any more.
There is still a propaganda department in the Chinese Communist Party, but right now cultural diversity is at its peak since the founding of PRC (which is not really a achievement). The Internet has greatly changed the lives of the Chinese people. Though the government has a strict Internet censorship policy, the effect remain limited since there are so many people online. The great fire wall also banned many foreign sites, but we can still visit those banned sites using VPN or other methods, and Internet censorship will face a bigger challenge when IPv6 become more and more popular.

I can not find the French version.

Hello! Is it possible to find Russian version (I mean do we have a Russian-translation)?

There is not a Russian translation.